Sentiments and the Stock Market

As I write this, the Indian stock market is curing a lot of punters of their constipation by going up and down like a yo-yo. I'm watching the CNBC TV18 channel to find out what the wisest in the land prognosticate for the stock market. After all, it's money, honey.

Well, all that the nice lady with the lousy make-up is talking about is "sentiment". It is news to me that hardened capitalists like stock market traders can be sentimental, but apparently, that's what they are. I can almost imagine them sniffling and wiping away a tear as they contemplate the widow or orphan whose bread they have just snatched. Well they are very sentimental people. Sometimes, they send stock prices up, especially when they are sentimental and happy. At other times, they send stock prices down real fast, like now, when they are sentimental and scared. Hmmm.

I get the sneaky, but extremely heretical here in my office, feeling that the people on CNBC TV18 do not know anything about the market, which direction it is going, why it will do so, what clothes are in, why it is uncool to have 17 long strands of hair combed across a bald pate in a bid to appear unbald. Oh no, the CNBC TV 18 guys know everything. If only we could understand properly what they are trying to say, we would all be millionaires. This dude just told us that in his view, the stock market would oscillate in a band. What band would that be sir? A jazz band? The New York Philharmonic? The Naval Band? A rubber band?

And now, another bloke tells us to adopt a wait and watch policy. That was so deep. He must have really put hours of thought before he came up with that one.

I think I will apply to CNBC TV18 for a job. I am ugly. I have no dress sense. I am very good at talking without routing the content through the brain. I have an MBA, too. Am I overqualified?
8 comments

Why the stock market will go up again

As you know, the markets tragically crashed on Monday, despite CNBC TV18 saying that nothing of the sort was going to happen. Well, PC and Manmohan immediately invited me to Delhi for a briefing. They know I am a popular blogger, doing much to mould opinion in the cyberworld. (I don't want to sound like a braggart, but a recent survey indicated that twelve - yes twelve! - separate people actually read my blog).

As it happened, only PC met me because Yechury and Karat managed to corner Manmohan Singh outside his office as he was leaving and were beating him up for speaking to the US ambassador over the weekend, presumably about the Indo-US nuclear deal.

PC: Thanks for coming at such short notice, Naren. Don't worry about Manmohan. He's used to it, plus the CPI(M) are really very decent people, they never hit you with sharp objects or cause much permanent damage. How are Sheela and the kids?

Me: They're fine. How's your son? Still profiteering at the stock market?

PC: Daily! What do you think he is, some kind of petty trader?

Me: Sorry, my bad. Well then, what did you want to speak to me about?

PC: As you know, the stock market crashed the other day, without anyone telling us a thing. We are on a mission to restore investor confidence in the market.

Me: But wasn't the stock market overheated? Several economists including Bimal Jalan, former RBI governor, have called it a bubble.

PC: Oh no, definitely not a bubble. It was a very stable exponential rise. These guys are very impulsive and short sighted. Don't think before they speak.

Me: Even Bimal Jalan?

PC: Especially Bimal Jalan! He thinks he understands economics better than us just because he happens to be an economist. Let me tell you, we have been having some wonderful indicators. Our per capita income is up 0.2 %. Corruption is down 0.2 % And the percentage of the population below the poverty line has dropped by, let me see (leafing through his papers) 0.2%. Plus we have a better human rights record than China, unless you count Gujarat.

Me: Why do you think the crash happened?

PC: It happened because of the US sub prime crisis, but it will pass.

Me: But hasn't that been brewing for months now? Why should that result in such a steep crash?

PC: Our little broker community, while tremendously able and competent, is a little slow on the uptake, especially if things are spoken in a Yankee accent. They thought the sub-prime crisis meant that the Al-Qaeda had captured a nuclear under-sea vessel.

Me: Which way do you think the market will go now?

PC: Oh, there's only one way for the market to go, and that's up!

Me: Because the fundamentals of the economy are still good?

PC: Yes. And also because the entire experience of the crash has raised the average investor IQ by just 0.2 %
9 comments

In which I meet some movie stars 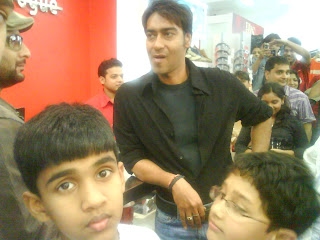 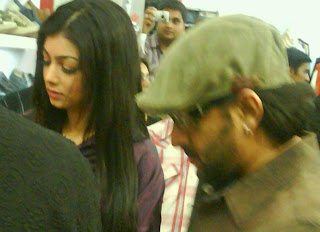 I can't say I have a great fascination for movie stars. Primarily it is a case of sourus grapus, a common medical condition which heightens one's awareness of the incompetence of others. Therefore my considered opinion is that, after fashion models, the president of India (and the vice president of course) and the guys who comment on the stock market, Hindi movie actors are the most useless bipeds in the world.

Thus, when Ajay Devgan, Arshad Warsi and Ayesha Takia walked into a Provogue store in Malad West, I was standing non-chalantly, leaning against a wall and making snide remarks that I had seen better looking personnel in airlines and restaurants while the wife and kids were busy swooning.

The crowd energy was simply awesome. They had to shut the store for a while till the stars were done and then whisked out through a side entrance.

After this, I have become a much sought after raconteur. People who, upon hearing me expound on interesting episodes in my life , begged me to write a book about it instead of telling them, now want to know every detail of the great encounter. Did he shake hands with you? Did she? Is she as sexy in person as she is on screen? Is Arshad Warsi witty? The answers are yes, yes, no and no idea. But you wont catch me saying it like that. Oh, no siree, I am milking it for all its worth. Just the other day, I was forced - FORCED - to have two extra drinks because I hadn't got through the whole story.
10 comments

How to tell Australian cricketers from monkeys

In our endeavor to educate the ignorant public (you, that is), we have decided to take up a sensitive topic which is How to tell an Australian cricketer from a monkey. We know this a very tricky subject and that even experts like Harbhajan Singh have been known to make mistakes (he recently called the Australian cricketer Andrew Symonds a monkey and nearly got suspended. Silly of him. He should have said "ape", which scientists will tell you is different from "monkey").

As we were saying, it can be done, telling them apart, that is. By the time you are done reading this article you will be distinguishing between Australian Cricketers and monkeys with a confidence rate of 71.224%

Let's start with the basics. Australian cricketers are not monkeys. We know this is hard to believe but trust us. There are many points of difference, though most of them are discernible only under an electron microscope.

Firstly, monkeys are primates but unlike humans, do not have an opposing thumb. Australian cricketers, who resemble humans more closely, do. This enables them to bunch up their digits into a fist and extend only the middle one, the universal gorilla symbol for love and friendship.

Secondly, the average Australian cricketer has less hair than most species of monkey. This is the best distinguishing physical characteristic, according to several authorities in this field, because facial features can be very misleading. The leading case on the topic is Symonds v/s Singh where the plaintiff sued the defendant for having called him, the plaintiff, a monkey face. The courts ruled against the plaintiff on the grounds of reasonable similarity.

Thirdly, most monkeys in the wild do not appeal in unison, unlike the Australian cricketers. Their preferred method of pressuring the umpire would be to bite him in the nuts. This is why the BCCI, along with the entire Indian cricket team, wants Umpires Bucknor and Benson to officiate in the Jungle Olympics.

And lastly, Australian cricketers, unlike monkeys, do not mate promiscuously with multiple females. Unless they are Shane Warne.

We hope this article was illuminating, though the space provided was hardly enough to do justice to this vast subject. The reader is most welcome to attend the author's lectures delivered in the primates section of the Bombay zoo. He will be the one scratching his butt. Aussie style.
7 comments

How did Benazir die?

In an effort to make sense of the myriad theories about Ms. Benazir Bhutto's death, this blog decided to depute its worthless-but-devoted-to-journalism founder Narendra Shenoy to Pakistan to find the truth.

Honest and intrepid, Shenoy's quest started with preparing ground research. Fearlessly typing in "Pakistan terrorism Bhutto Assassination" into a toolbar graciously provided by M/s Google & Co. for this very purpose, Shenoy speedily unearthed a few unknown but potentially deadly facts about that fine country, listed below for your benefit
1. Ain't no democracy there
2. No government even
3. No law and order neither
4. Plenty bearded blokes who are living in AD 632 and who can shoot quicker than they can think

Having unearthed all that information, Shenoy stretched out on the living room sofa and, deciding that this crime was best solved by employing the little grey cells, poured himself an 18 year old Glenfiddich. 'Bout as old as little Bilawal' he reflected. "More mature than him, though".

Scotland yard had been called in earlier and had delivered its verdict. "Sniper", Inspector Plod had told the press.

A little earlier, a Pakistan government (assuming one exists) spokesman had declared that Ms. Bhutto died from hitting her head on the door handle of her car when a human bomb went off.

When she died of course, the official (if there is such a thing in Pakistan) report was that she was gunned down by two people wielding assault machine guns.

Easily confused with a sniper, of course.

"Plod, you're an ass", said Shenoy, to the Scotland yard detective. "It's clear as daylight. The murder was committed by administering strychnine through her anti-dandruff shampoo medicine, which was given to her by the husband of her former maid whom she had dismissed for being a thief and thus competing with her husband Asif Ali Zardari."

The case solved, Shenoy decided to take the rest of the day off and reflect on the wisdom and inner beauty of this fine lady who had left no stone unturned in her effort to liberate the people of Kashmir by waging a jihad against the Pandits who, with their wives and children posed a dangerous threat to the people of Kashmir, especially by being unarmed just so that they could pretend to be innocent.
3 comments