We've been busy at the Shenoy household.

And the missus? When I, her true love and eternal companion, say I want to eat in a place, she tells me to stay off the starchy food.

"Stick to salads" she will say and add "especially the ones without cheese". But with son, she will be all indulgent. "Pasta? How about some spaghetti?" she will say, and the words will flow easily.

We went to a place called Pop Tate's (Not kidding. Straight from the Archie comics). Son had his spaghetti.

He lifted up a spoonful and plonked it on his plate, with the air of Mark Antony, just having discovered Caesar's corpse.

"They should call this place Plop Tate's".

"Spaghetti is SUPPOSED to be like that!" said the missus, who was treating Pop Tate's something personal

"ALL spaghetti is like worms" said the missus, and as with most obiter dicta of hers, ne'er a truer word hath been said

Missus paused while she composed a suitable reply. Meanwhile, I got my Chicken Enchiladas.

My delight was visible. apparently, for missus immediately said

"There is CHEESE in these here enchiladas!" she exclaimed

"There usually is" I told her. As the well traveled man of the world, one has duties.

In the end, I got to polish off the offending enchiladas while missus re-ordered "Caesar's Salad, please, no parmesan cheese"

All in all, not an entirely unhappy ending!

In which some tigers see me

I had a most interesting trip to the Tadoba Andhari Tiger Reserve, with a few friends. I shall call them Dr A, Ms. A, Dr. J and Dr M, and which tempts me to ask you logic puzzles featuring them, which impulse I shall nobly resist.

Right. How it came about was that I waxed lyrical about my last trip, which was in November, and these guys decided it was worth a visit, and in a moment of recklessness, decided to take me along. The missus  couldn't come so I dragged my business partner Mr. D and we tromped off into the wilderness.

So to summarize, the cast is as follows:


Tadoba is about 140 km south of Nagpur. The roads are really excellent, especially by Maharashtra standards. Our driver, who drove like he had taken up taxi driving because formula one wasn't exciting enough, got us there in about 2 hours.

We stayed at the Tiger Trails Jungle Lodge, a very well appointed and homely place at the very edge of the reserve. In fact, it is regularly visited by fauna of all hues, sizes and dietary preferences. Our hosts told us not to step out of our rooms after dark, NO MATTER WHAT.

The food is simply outstanding. We had a simple but delicious meal of a local recipe chicken curry, rotis, a couple of vegetarian dishes (which I admired visually), rice and dal, and some killer kheer for dessert.

After we returned, the first question missus asked was "The food must have been amazing, no?"

"Indeed! How did you know?"

"You're back from Tadoba and you're looking a tad obese. Elementary, my dear Watson"

We retired for the night. I had been sneezing and coughing away the entire journey and a couple of thoughtful and immensely therapeutic brandies sent me into a deep dreamless sleep. We were awakened by a cheery "Good morning!" and "Get ready for the safari drive" at what seemed to be midnight. I cursed and tucked in deeper into the sheets but the chap, who seemed to be experienced in rousing city slickers from their slumber, even those who had had brandy shots the night before, persisted and presently, I found myself standing by an open Gypsy in 10 degree C, which felt like -40 to a Bombay guy but once we were inside the forest, I sort of forgot about all that. 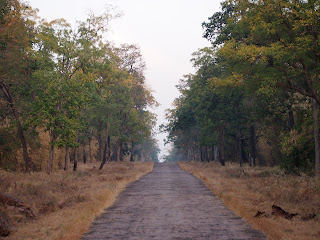 Here's the first vista that greeted us .... 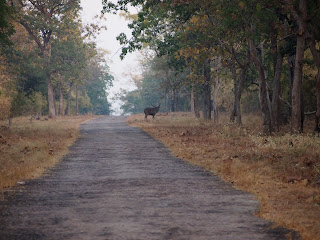 And soon enough, a large Sambar male presents himself. A word here about the "male" "female" thing. These naturalist types have an uncanny ability to tell a critter's sex without seeing its private parts. Some of them have give-away features - the Sambar above, for instance, had antlers which even the most liberated feminist sambar wouldn't wear, so it had to be a male - but other creatures are far less differentiated. Of course, it could be that they said naturalists were randomly giving' gyaan' as they say, secure in the knowledge that the pusillanimous Bombay guy would never get down and check for himself.  Anyway, I digress 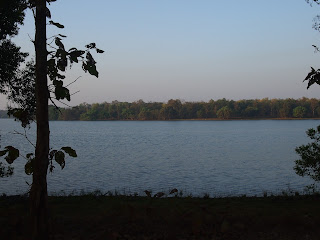 A large, beautiful lake from which Tadoba gets its name. Legend has it that there was a wise Gond king named Tadu who became a sprite and lives in this forest 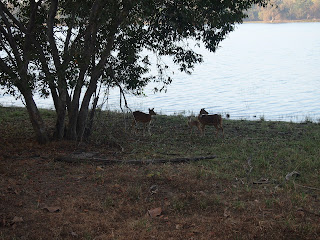 Spotted deer grazing by the lake 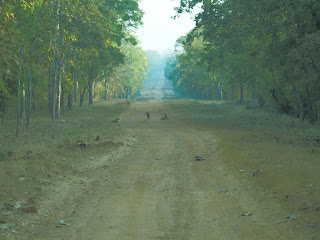 The most feared predators of Tadoba - the wild dogs. The locals call them 'dhole' 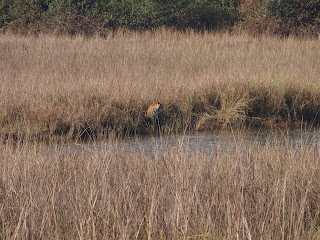 We went on to another, smaller lake called Teliya and came across this! 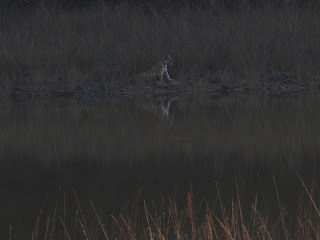 It was a family of five cats, the mother and four almost fully grown cubs - ("female", our naturalist guide told us almost immediately)

We spent another two days in tranquil bliss, visiting the forest twice a day (and getting a tad obese too, I suppose).


All in all, highly recommended.

Practicalities:
Best way to get in: Fly to Nagpur, drive from there

Best thing to drink when it's 10 degrees C - Brandy

Cheers and hope you visit soon!

Standup comedy shows and their part in my downfall


Man has always been a sucker for proving himself courageous. Show a Zulu lad a lion, for instance, and he will lose no time in grabbing a spear and challenging the beast to a duel, overlooking completely that he, the lad, weighs about 90 pounds to the lion's  600.

I have a similar impulse whenever I see open mics in comedy places. One does not actually grab a spear and challenge the audience but in nearly every other aspect, the contest is no less unequal.

Thus, last night I found myself confronting a grim looking lot for four eternal minutes. It was on the urging of a close friend, the chap known on twitter as @chuck_gopal, that I did this, and I silently cursed him for having talked me into it. And then I realized it was me. I had wanted to do this. I gulped and started my talk

I had taken the precaution of imbibing sufficient quantities of the stuff earlier in the evening but it did not succeed in suppressing the fluttering in the stomach. I had also, I realised, omitted among all this hustle and bustle, to actually write down something before hand. So about 8 seconds before I was due to be handed the mic, I found my mind completely blank. This is a desirable state of being if you're a practitioner of yogic meditation but not if you're a stand-up comedian staring into a sea of furrowed brows and stony eyes of a group of yuppies miffed at having their electronica music turned off. "You had better be good" those eyes seemed to say "and you'd better have some ethnicity based mimicry handy"

The eyes grew stonier. I made a joke about my sons trolling me. Stonier. One about them convincing me that Edinburgh was pronounced Edinbra which of course was actually short for Edinbrassiere. Not a twitch. The crowd as @chuck_gopal told me later, was tough. He also very diplomatically told me that my stuff was too cerebral for the general public. "Eh?" I remarked to him. "That means" he said in a kindly voice, "not containing any mimicry items". Apparently @chuck_gopal's stuff also was too cerebral for our distinguished audience. We sighed and downed our drinks, he a beer, I my old monk rum, both secretly wishing it were hemlock.

To get on with the story, I prattled on for another three minutes, expecting something squishy to be thrown at me.  Luckily, nothing of the sort happened.

Anyway, the experience has left me a better person, more in tune with the trials and tribulations of my fellow humans, and I have solemnly resolved never to open-mic again, at least not till I have bested a lion with a spear