It's been a while since I've blogged (though I suspect no one's really noticed) and much has changed. My little babies have grown up and moved out to study engineering in faraway places, leaving missus and self mildly at a loss to find things to discuss. This is because, for a very long time, whatever we discussed was somehow connected with one or both of the boys.

"He is playing the guitar", she would say to me

This would usually fall below her standards of acceptable replies

"He's supposed to be studying. He has tests coming up"

"Hmm? What do you mean 'Hmm'? You are his father. You tell him to study"

Missus comes from a fairly disciplined family. She tells me, though I find this extremely hard to believe, for my father in law is such a gentle soul, that when her father spoke, they would tremble. My sons have often rolled on the floor with laughter because of something I said or did, but I don't think they've ever trembled. But when missus is in moods like that, you don't quibble. You do as commanded.

"Told them!" I would report back, confidently, for I had. I would shrewdly suppress the fact that not the slightest heed was paid to me by the recipient of that speech. Missus would diagnose this in about two seconds. She would say something imperious. Something like "There is a doctrine in law, I've been told, that an untruth has two components. Suggestio falsi and suppressio veri. Which means it is a lie, if you lie. It is also a lie if you don't report the full facts"

"You were supposed to make him stop playing the guitar"

I would intently examine the floor tiles for minor defects.

And every once in a while, we'd go back and forth about why the hell should they study (me), how the hell he'd never get into the IITs if he didn't (she), how virtually everyone I knew who was from the IITs was a bit of a pill to whom I'd never marry my daughter, had I had one (me) and finally, how people who derided IIT grads were usually people who didn't get into the IITs themselves (her). This would finally end happily thanks to a cockroach or a lizard, who populate our lovely city densely, who had sashayed into our bedroom and whom one non-IIT grad, to wit, your author, would eliminate from the surrounds, winning instant love and affection.

All this has now ceased. The boys are independent and, more importantly, they know more than missus and I do about virtually everything. So, missus knits. I play chess on the internet and get beaten by virtually everyone I play with (I have, at the moment of going to press, excised the chess app from my computer and phone, having solemnly vowed never to have anything to do again with the blasted game). We go to the food court at the mall. Occasionally, the old spark resurfaces. Today, we dined on shawarma, and missus, for some reason, found my technique below par. "For heavens sake", she told me, "there's hummus smeared all around your mouth". It WAS particularly gooey, this shawarma. I tried to wipe it. :What ARE you doing? Now you've got hummus in your hair" and so on. Missus, of course, didn't have a single molecule of the damn thing on her person. She has supernatural powers, I tell you. As I was telling you, we don't seem to have a THING to talk about, these days!


File photo of when the tykes were young! 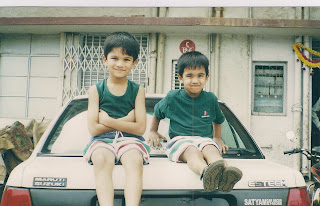