Roasting chicken on a wood fire!

The son was bored. He had just finished his class XII exams but had the IIT entrance looming over his head, and judging from the fact that he gnashed his teeth and furrowed his brow every time he was reminded of it, he wasn't particularly looking forward to the prospect. There are chaps who will excitedly jump up and clap their hands in childlike joy when told that the IIT entrance exam is just a month away and there are chaps who will not. Younger son was resolutely among the latter.

"Play your guitar" I suggested. But his heart was not in that either. Apparently he had heard the guitar playing of one Joe Bonamassa and he despaired that he would never play anywhere remotely as well as him. "Look at Annie", consoled missus. Does the fact that he can't sing deter him from believing that he will one day be mistaken for Mallikarjun Mansur?"

That perked up the lad a bit. Slanderous libel, of course. I sing very very well indeed. But mother and son had a laugh and the missus, going all "awww" at my evident inability to see the humor in that, said "Lets grill some chicken"

"On the Berkely  Darfur stove?" I piped up excitedly

So we marinaded a kg and a half in one cup dahi, 6 tbsps chilli powder, 3 tbsps salt (it did turn out to be a tad salty so you can consider making that 2 tbsps) and let it rest for an hour. 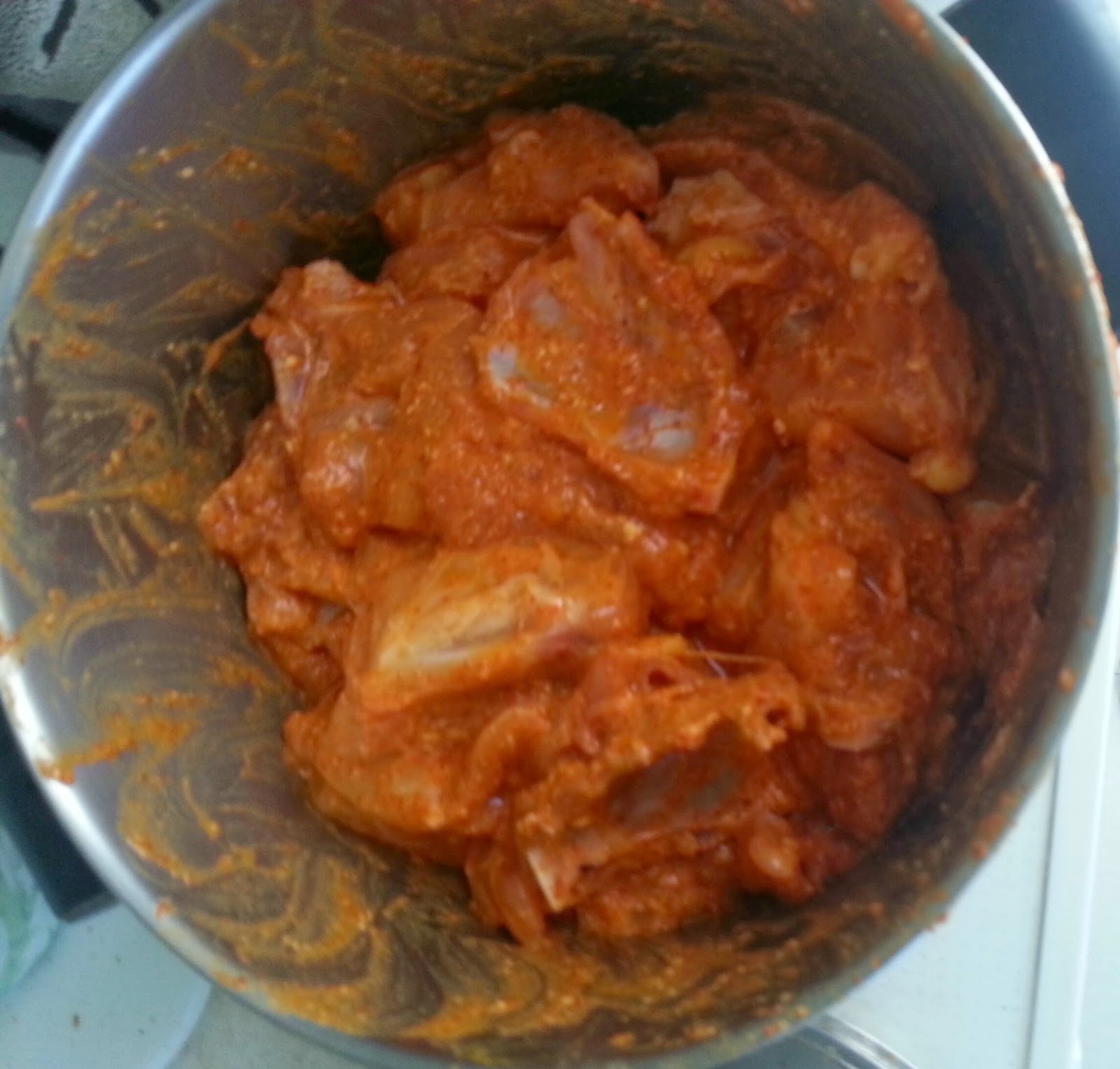 That done, it was time to light up the stove. This is easier said than done for city slickers but I luckily found that missus has a decent amount of experience. After laughing impolitely at my very scientific approach at initiating combustion, she rounded up some dried leaves and wood shavings and lit it up in a few minutes 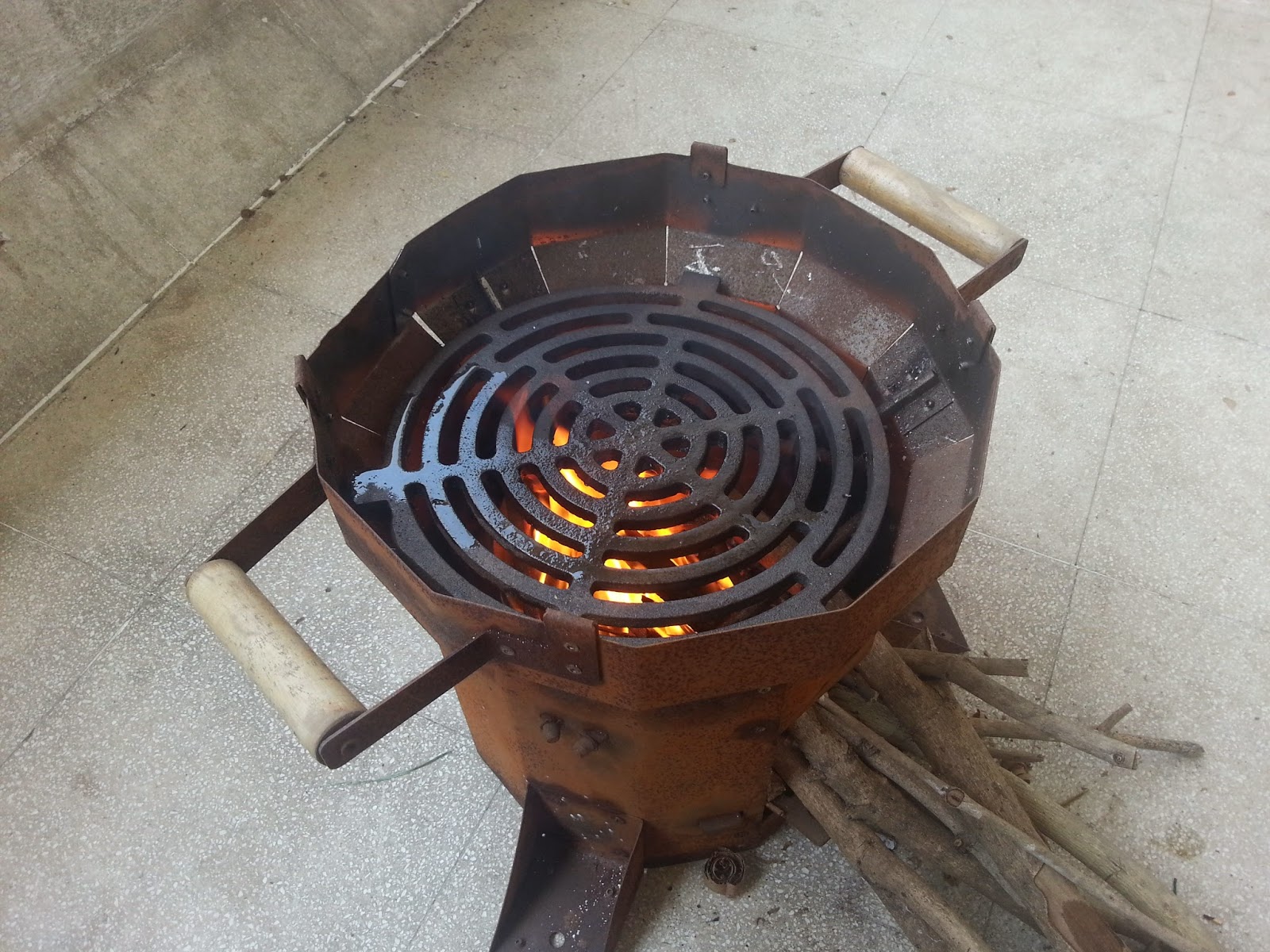 I remembered an article written by my friend Madhu Menon, in my opinion one of this country's finest chefs, in the Mint newspaper. Dug it out surreptitiously on the phone and using his principles, grilled the chicken first on a hot flame for about two minutes (the Berkeley Darfur stove's capacity to deliver a very hot flame came in handy here) and then the second side for about 6 minutes on a side of the grate where the flames were not that intense 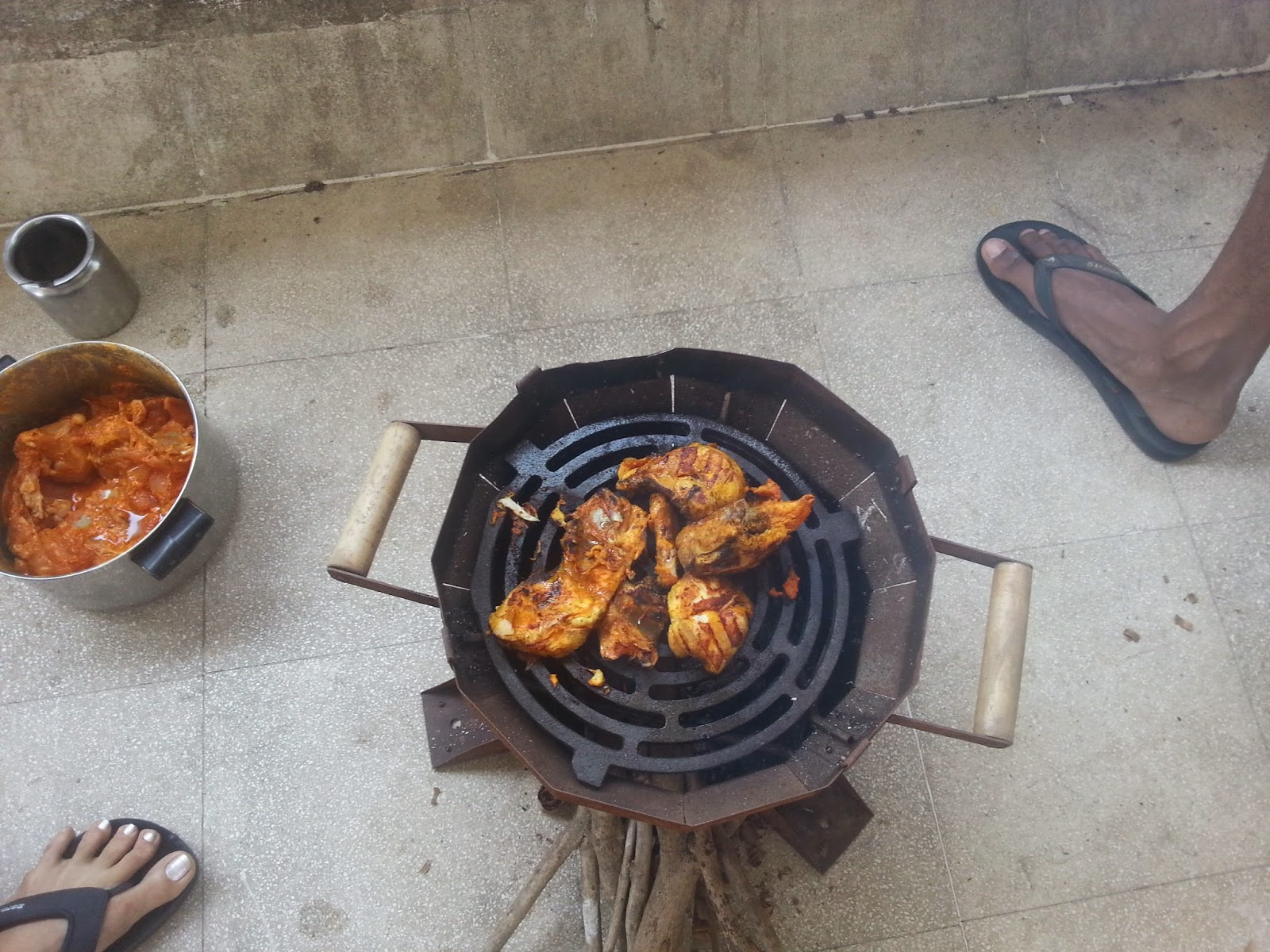 The result was chicken nicely charred on the outside and beautifully moist inside. Missus and son both loved the beautiful wood-smoked flavour! 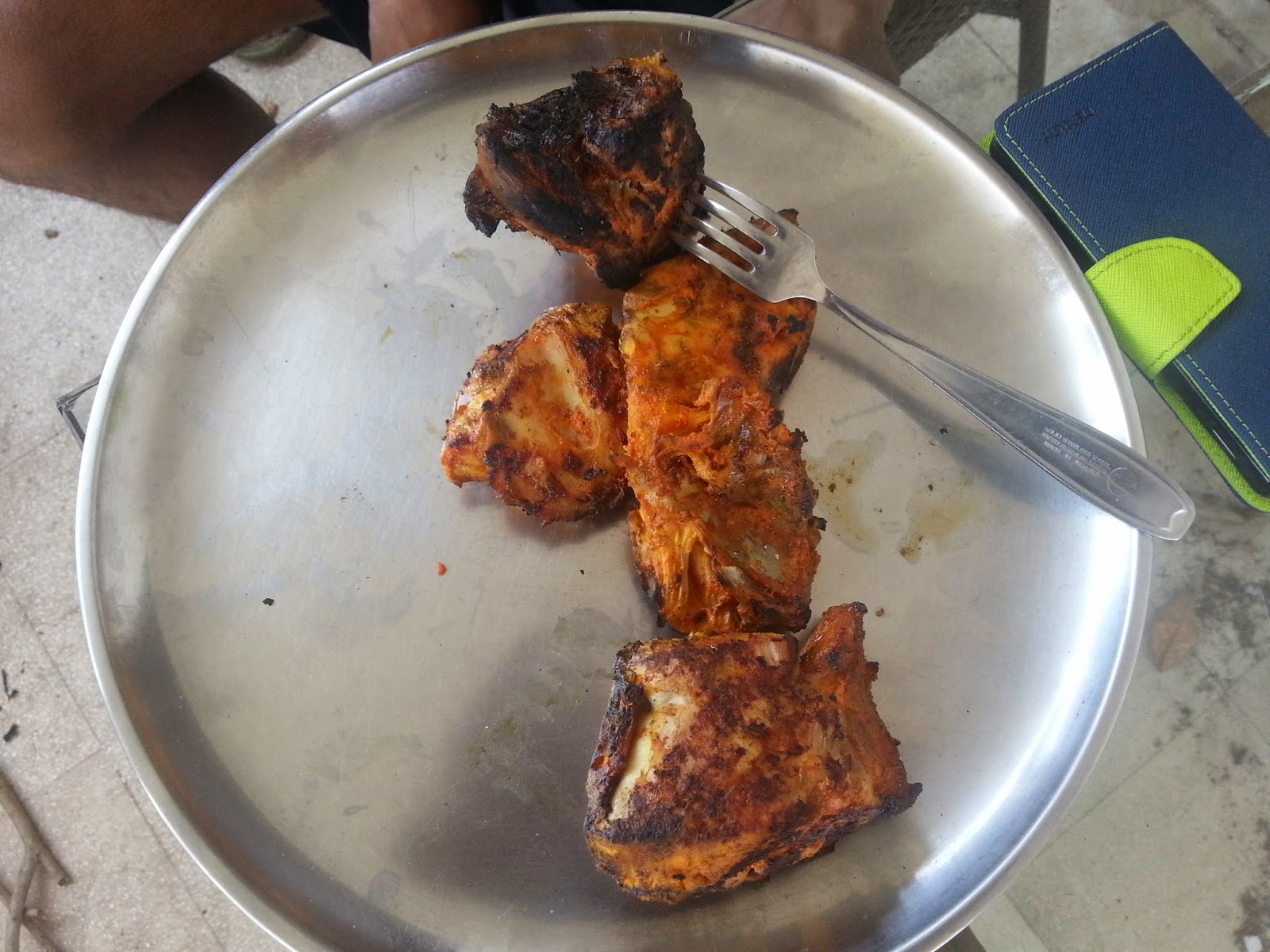 I grilled a few potatoes and onions as well, and some cherry tomatoes plucked fresh from mom's terrace garden. Oh, and some fresh oregano leaves as well! 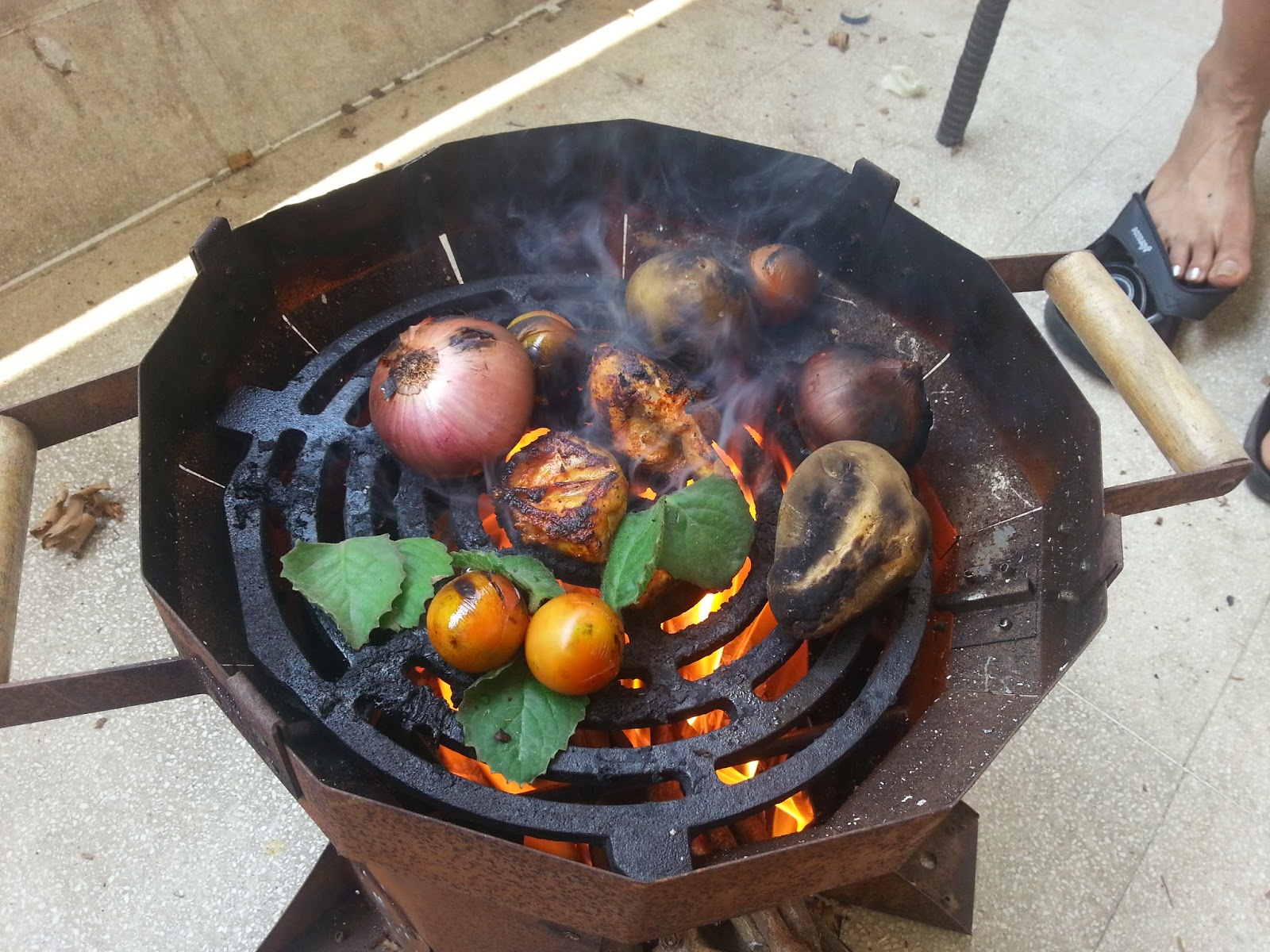 Cheers, and hope you had a great Holi too.

Uday Velhe works with me. He is our press operator and is mostly a shy and retiring person. Like Blair Eggleston, Wodehouse's fearless novelist, Uday would, if he found himself ensconced in a boudoir with a scantily clad Russian princess, take the seat nearest the door and talk about the weather. But let him loose with a knife and some provisions and he can knock you off your feet with the awesomest chicken curry you ever ate!

Here he is, in action, with the famous Berkeley Darfur Stove, an energy efficient wood burning stove developed by UC Berkeley for refugees in Sudan's Darfur.

The recipe is elegantly simple, serves 15 and uses 3 kg of twigs on the Berkeley Darfur Stove!

In case you don't have Uday (not looking his best in this photo, alas, because when I clicked him, he was straining to break a largeish twig) 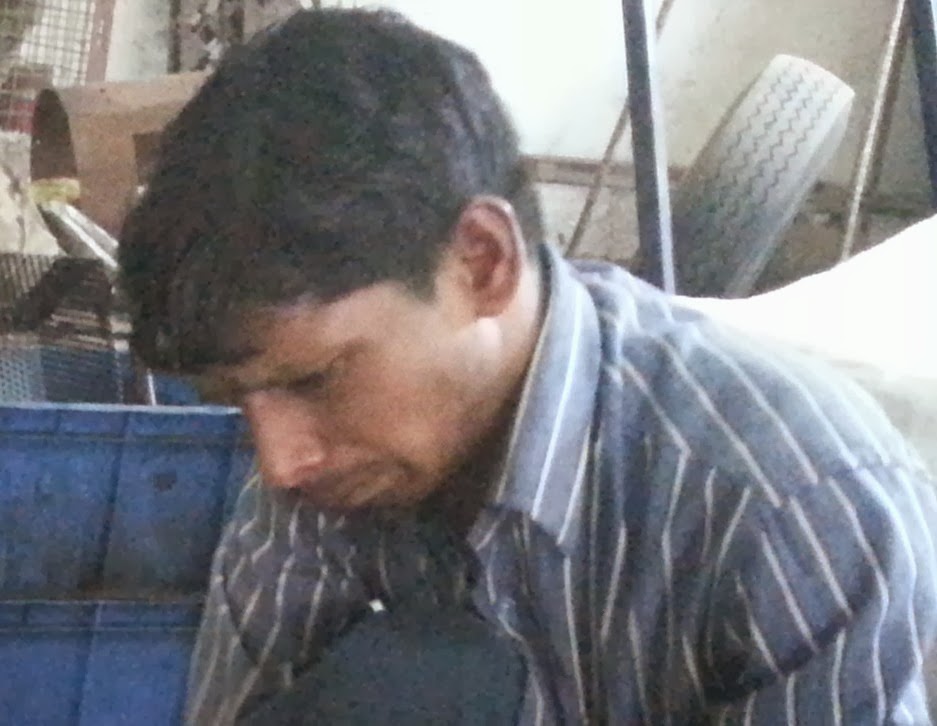 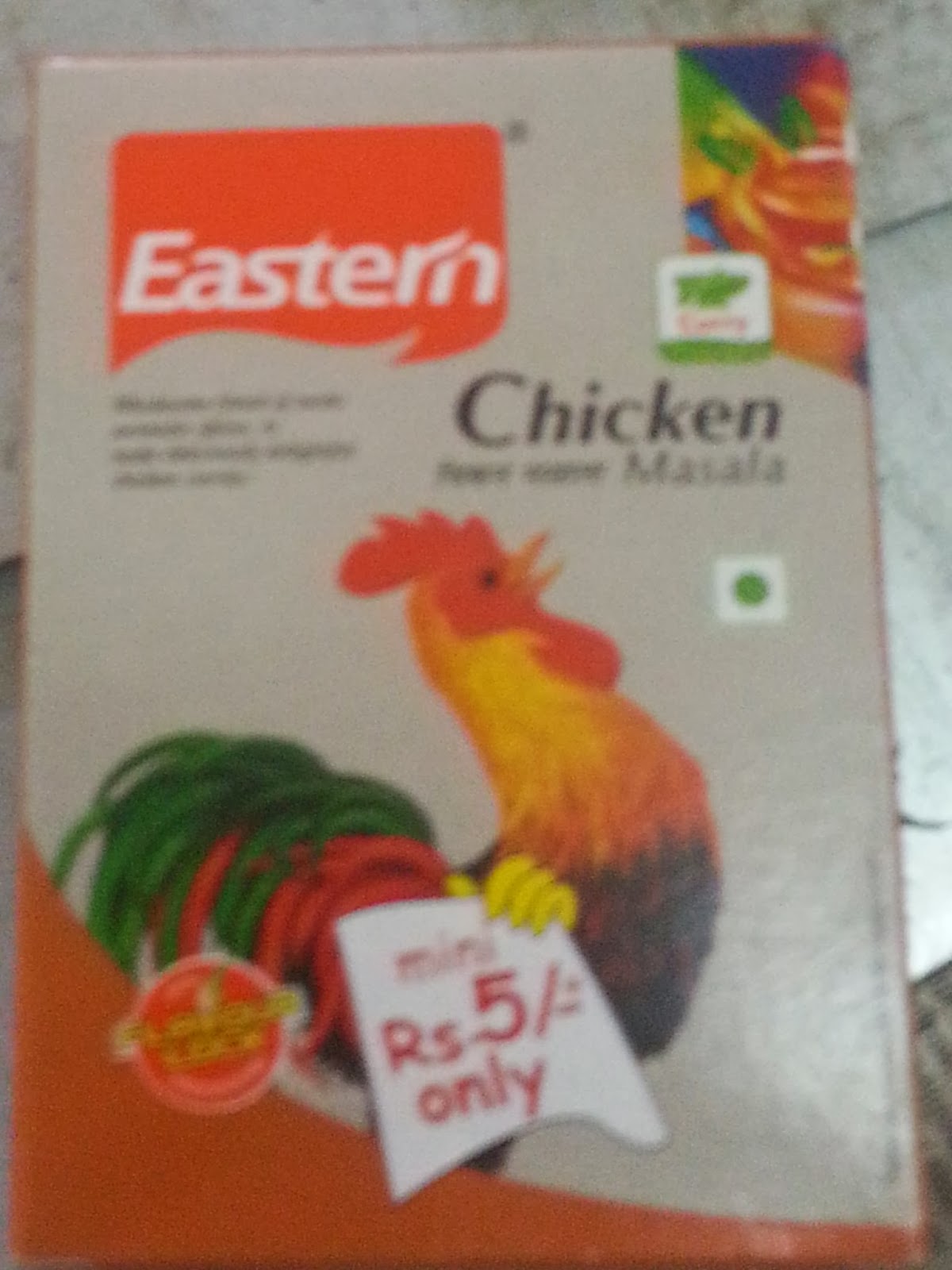 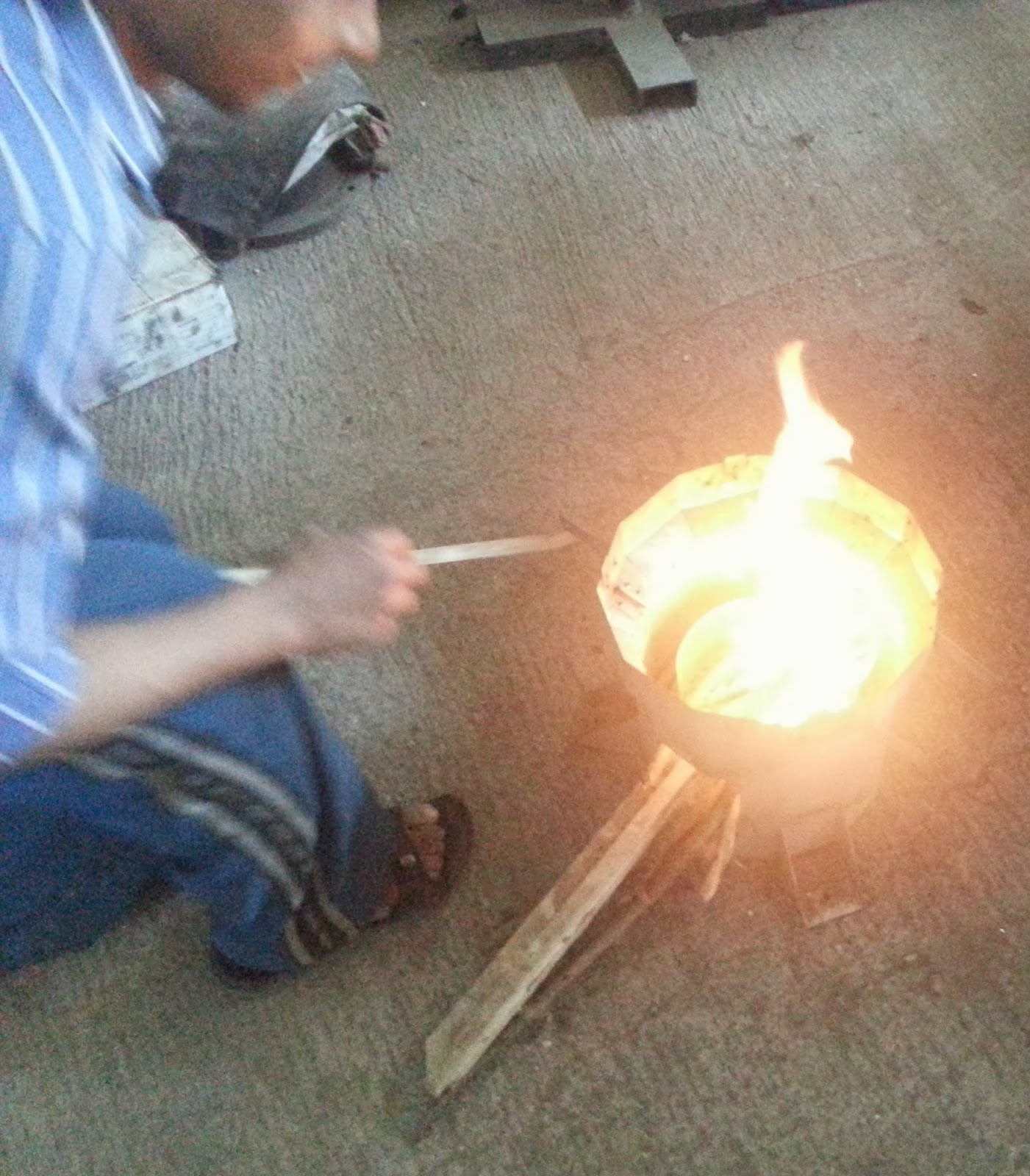 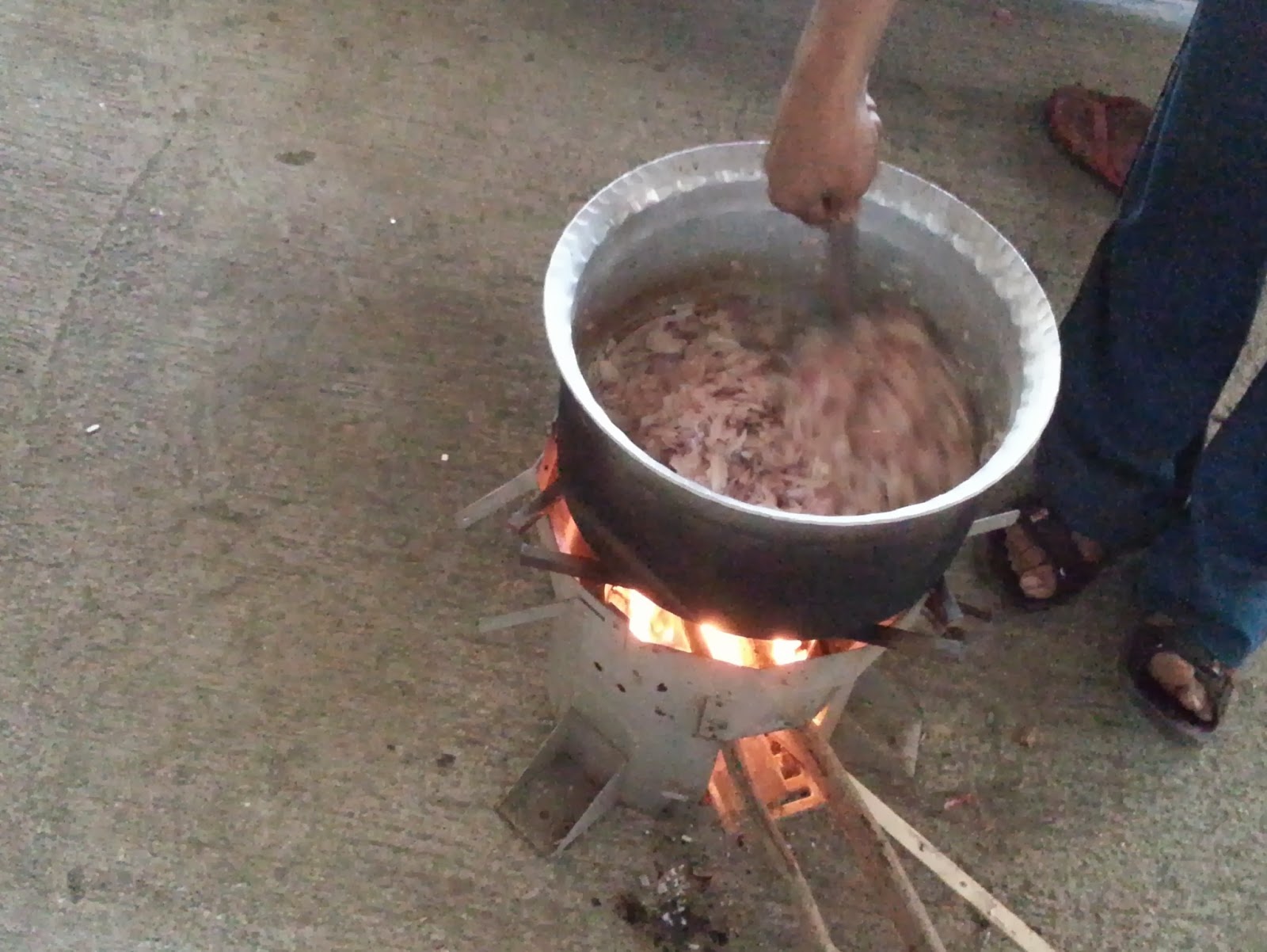 3. When the onions are nicely caramelised, says Uday,and you will know this from the smell, which is rich enough to spurn wall street jobs which promise seven figure bonuses, remove them and keep them aside 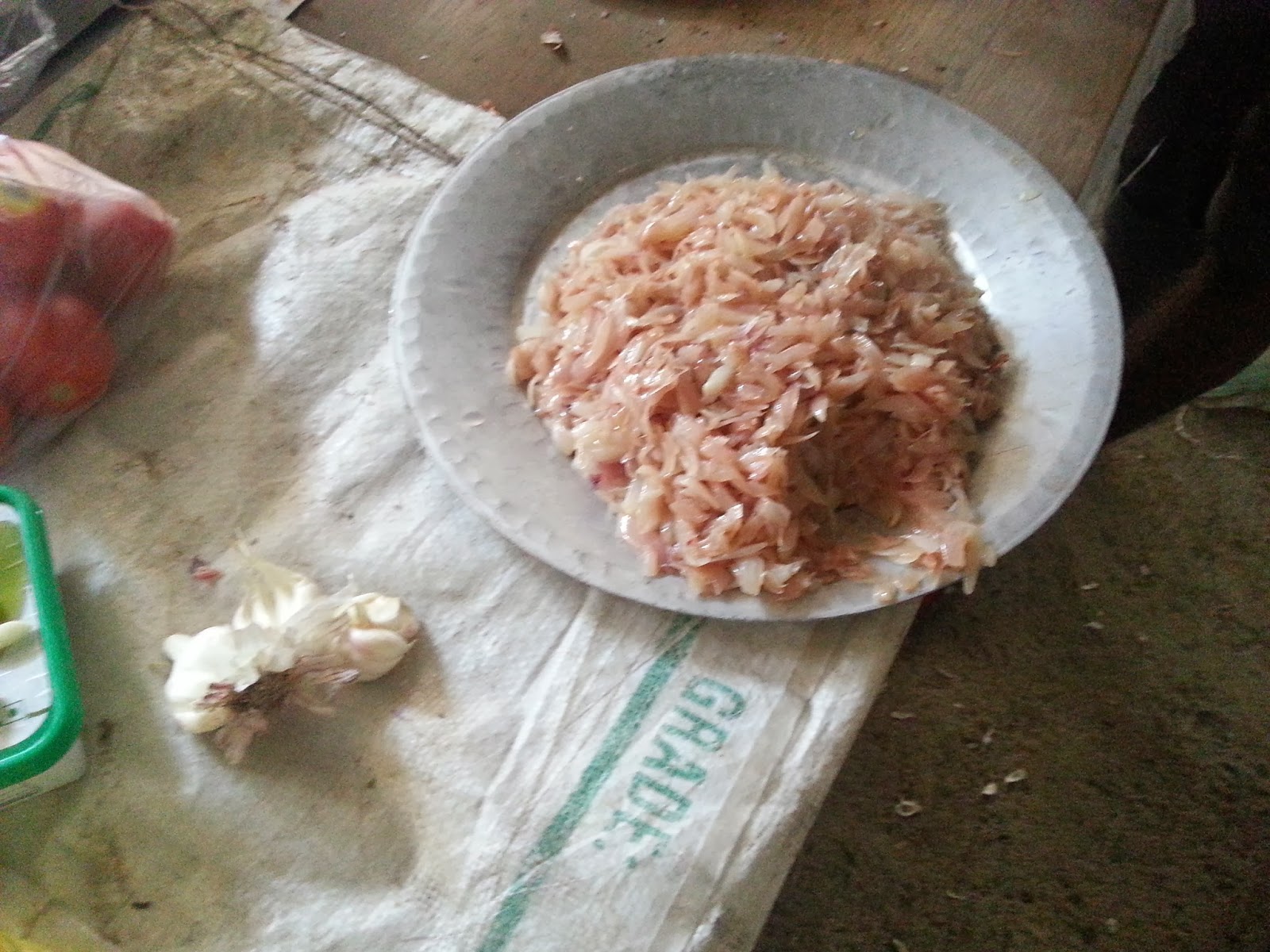 4. Roast the grated coconut. No oil and all, just roast 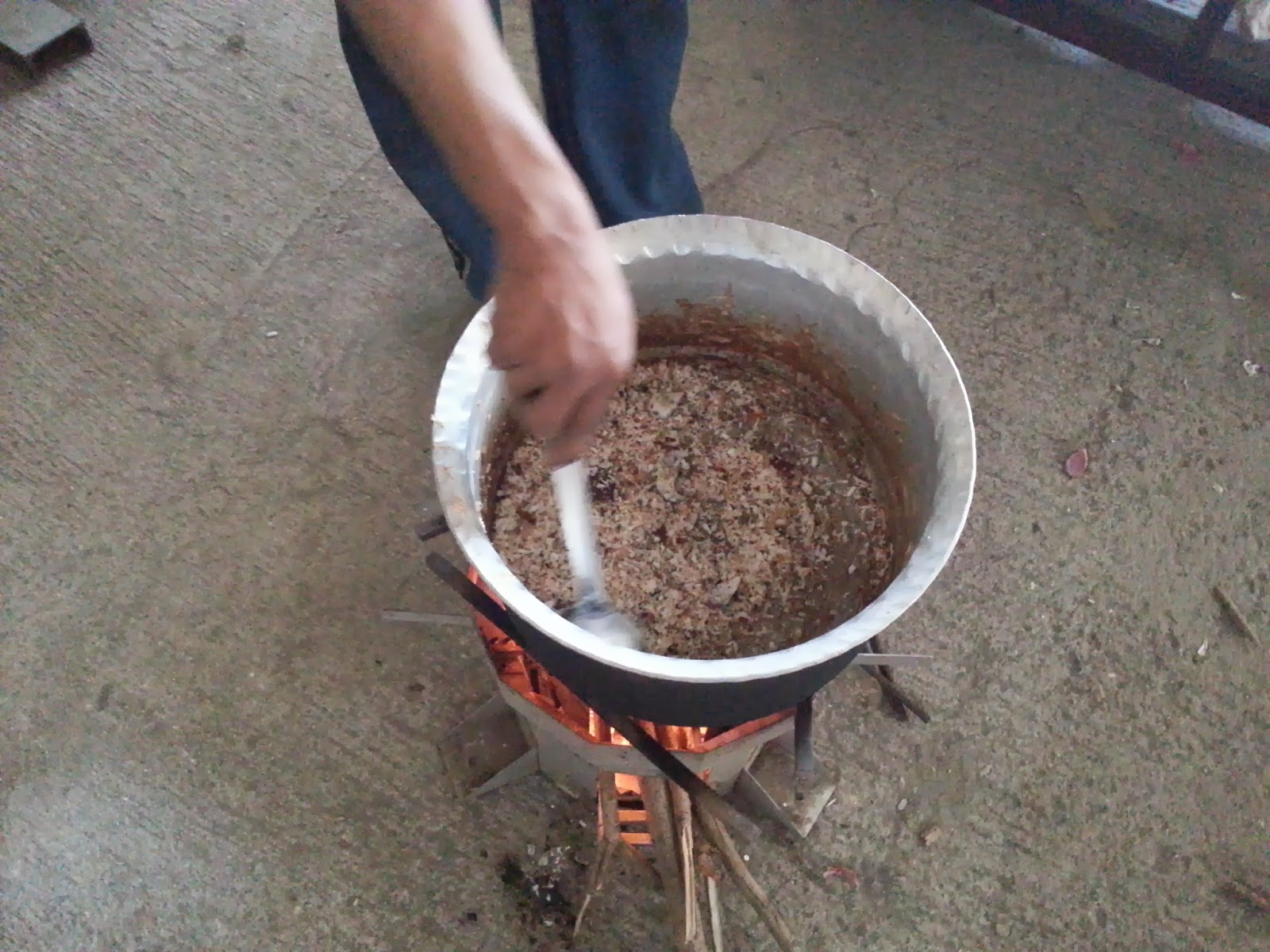 5. Grind the above, (i.e., the sauteed onions, the grated coconut, 3/4th of the 20 rupee worth coriander leaves, half the garlic, half the tomatoes, the small piece of ginger and the spices, ie, the star anise, cinnamon, bay leaves save two), into a paste on the mixie

6. Heat some oil (lots of oil, actually. About 200 ml.)  and fry the rest of the garlic and the two bay leaves you saved from step 5 above, in it till it is nice and brown 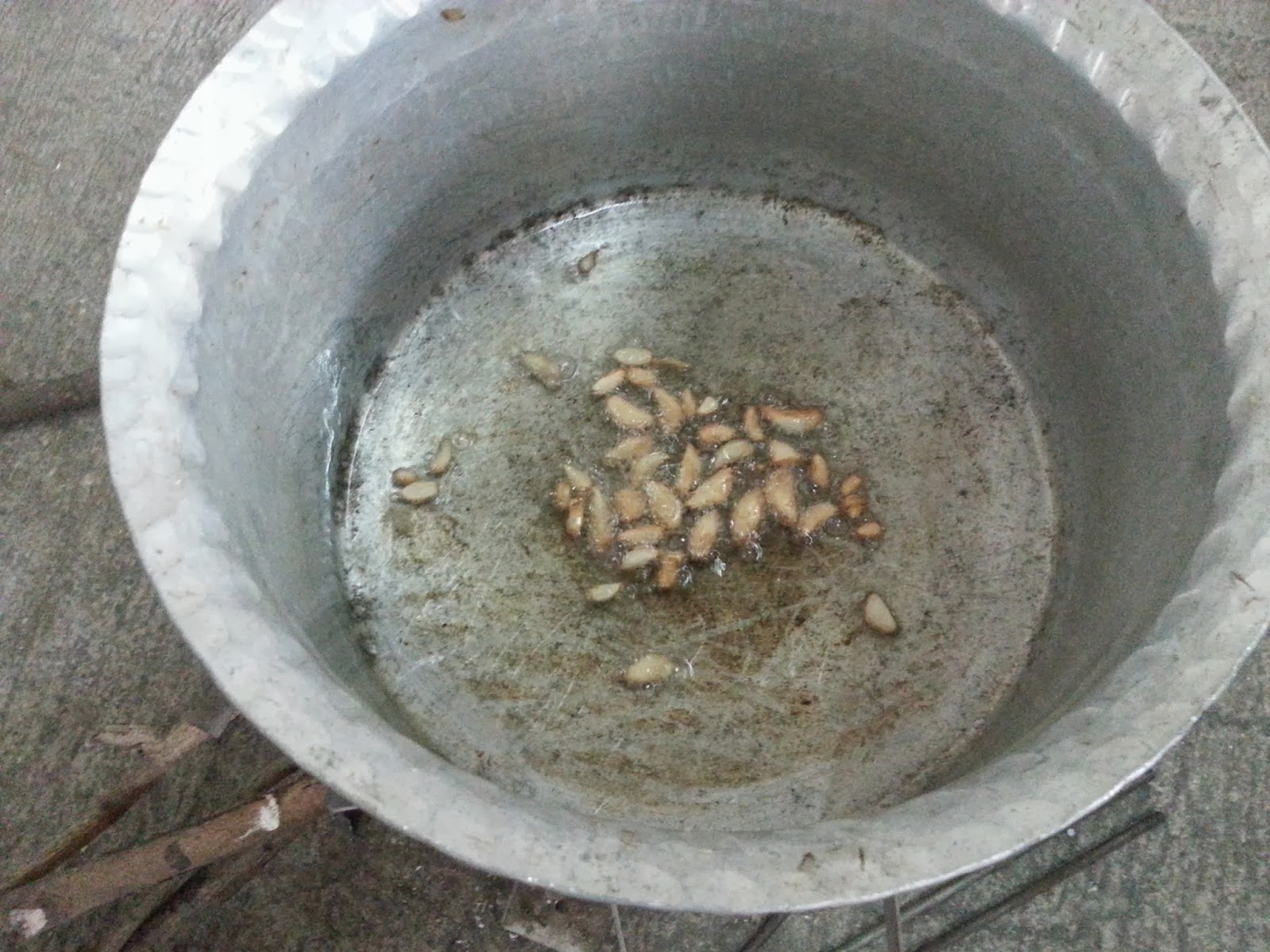 7.Dump into this half the paste from step 5 above, the chilli powder, the garam masala and the Eastern Chicken Masala and fry it, till all the water in it is gone. You will know this, says Uday, by the fact that the oil begins now to float on top 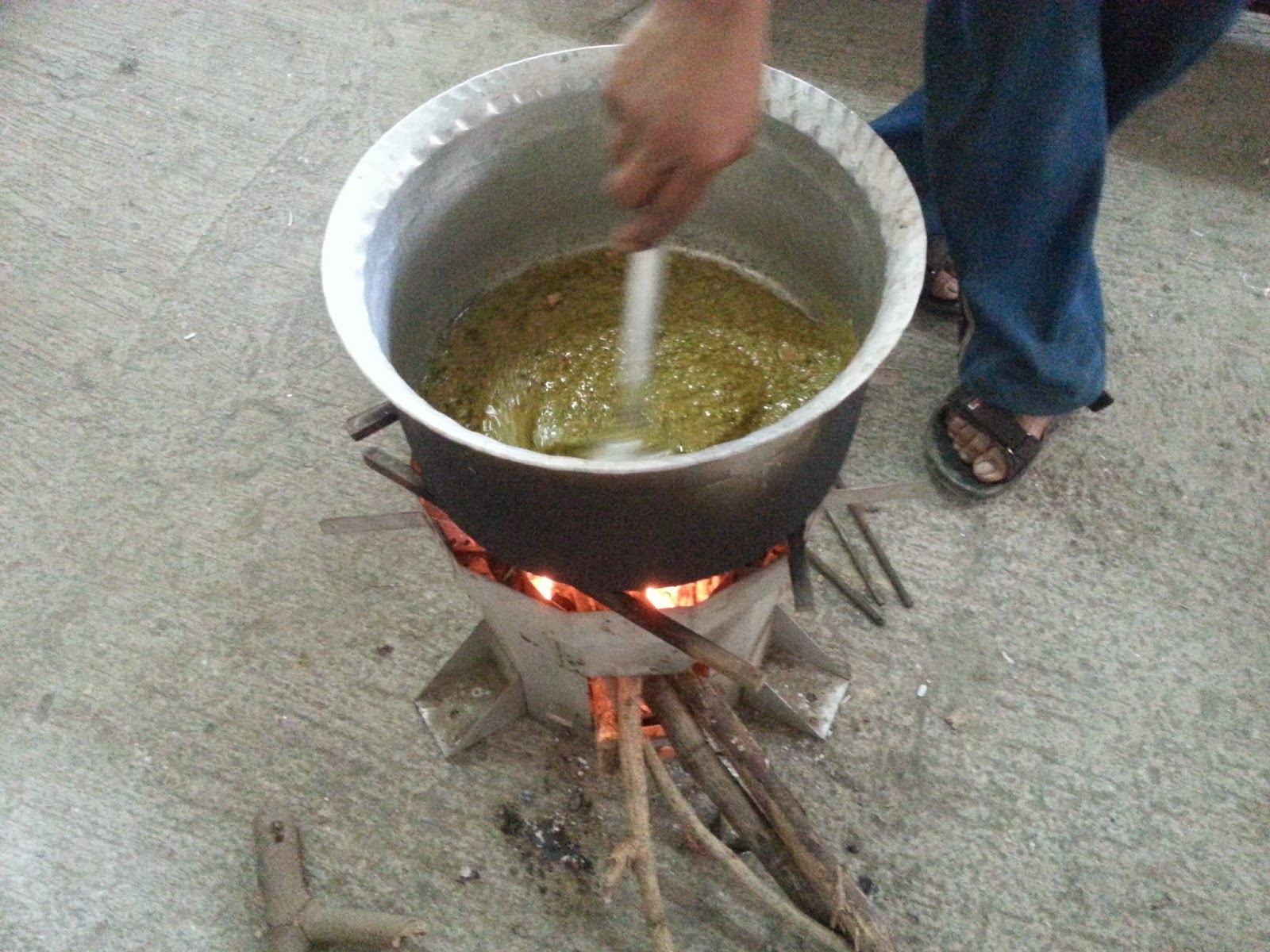 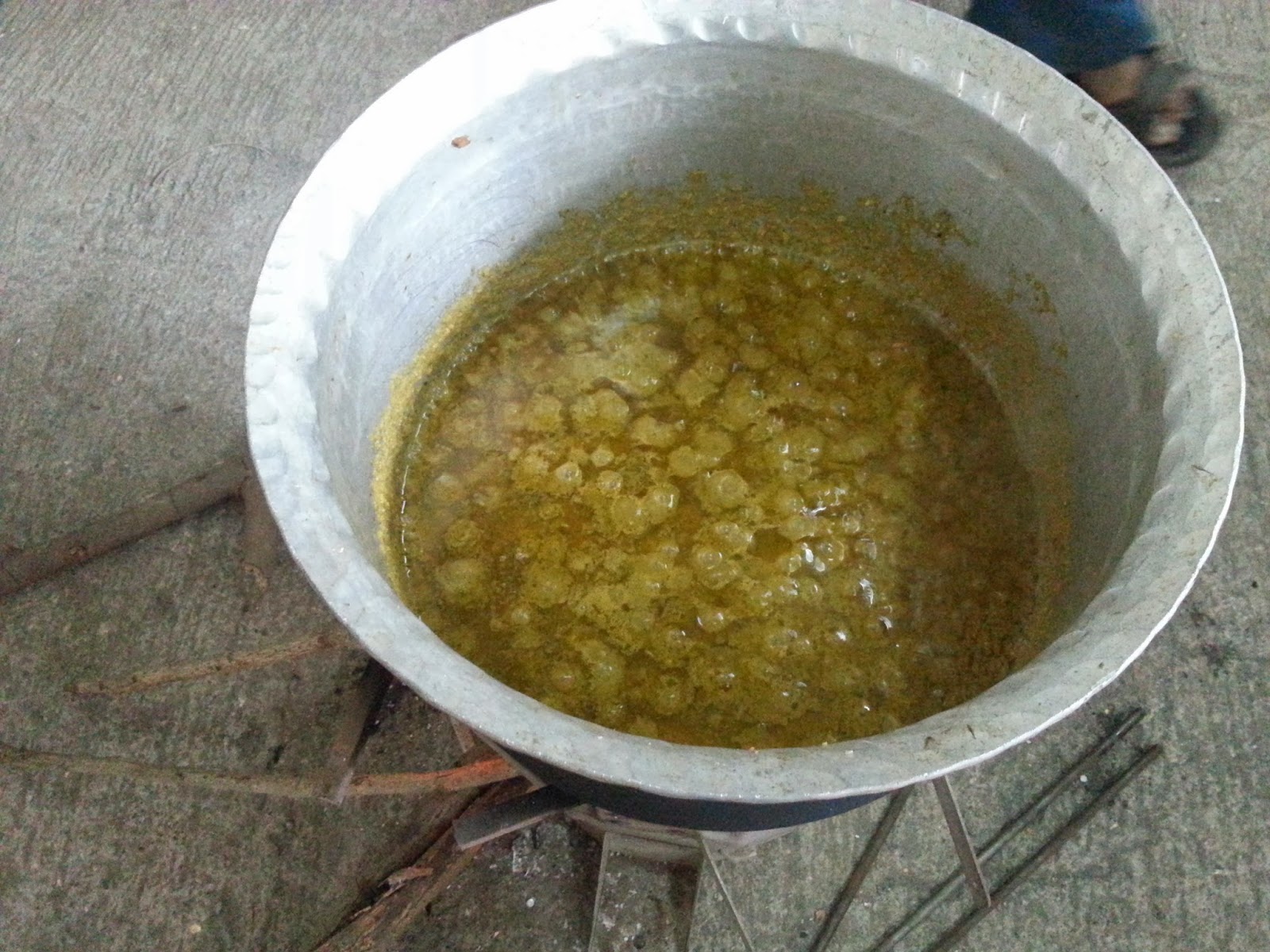 8.Then add the chicken 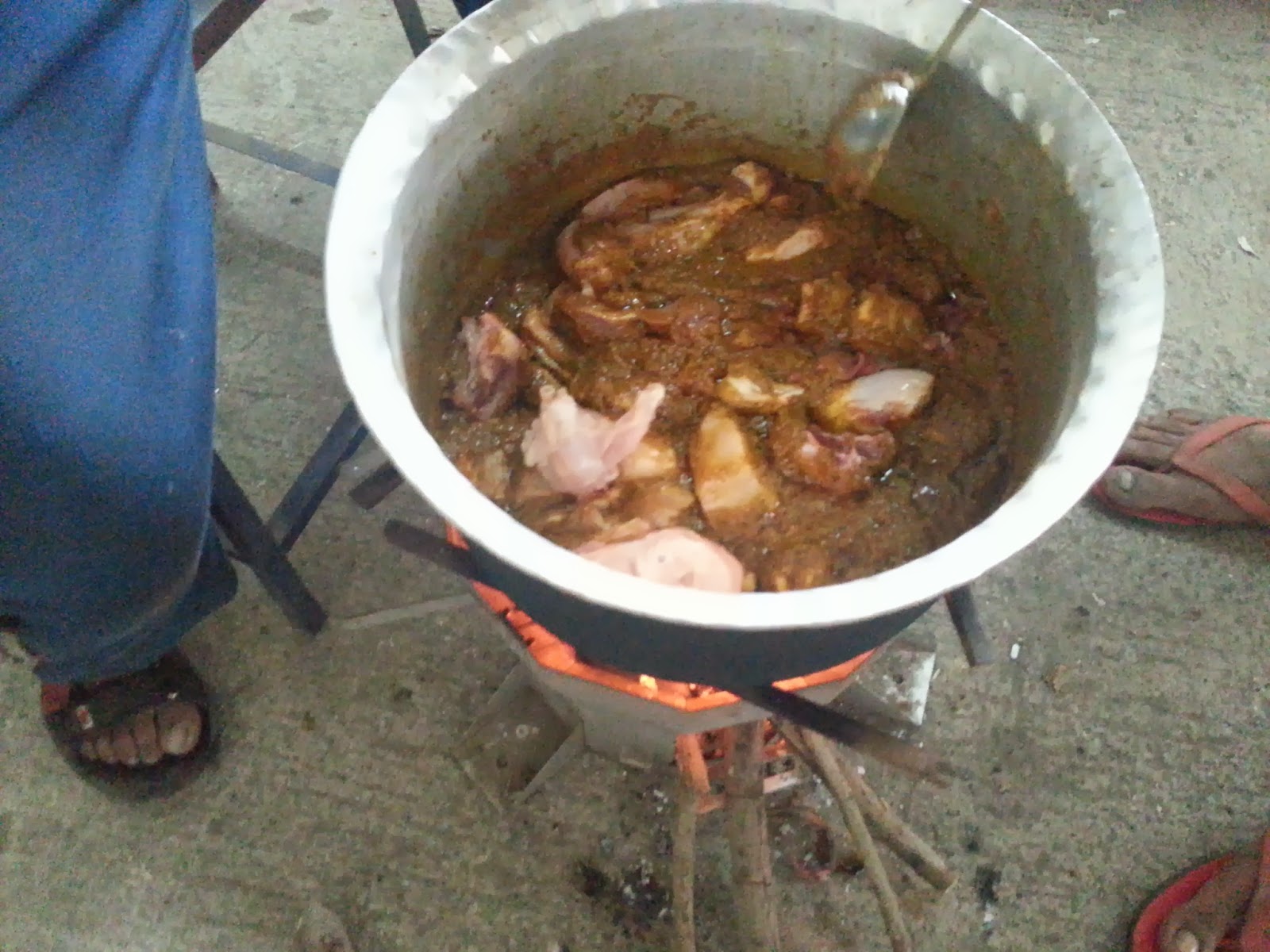 and fry it for about ten minutes

8. Add the rest of the paste, the rest of the tomatoes, the rest of the coriander leaves and about 1 liter of water and boil the bejesus out of it. Here, you have to add the 'salt to taste' which I measure out as about 8 tbsp. But I could be wrong (I was drinking beer by this time)

And Voila! You have Chicken a la Uday Velhe!

Best had with Pao or Chapati

I grew up drinking regular milk tea till somewhere along the way I started drinking black tea without sugar. I think it was those Indian Airline flights. The air-hostess would walk down the aisle with a pot of black tea and black coffee and then return after a half-hour with milk, by which time such tea that hadn't spilled on your shirt because of turbulence had turned quite cold and when mixed with the lukewarm milk, was very difficult to send down the hatch.

Anyway, I began to drink my tea black and once I got used to the slightly bitter and acidic taste of unsweetened black tea, I found that I no longer relished the with-milk version. This would occasionally be a problem in the industrial areas that I frequented, especially when I would visit someone's factory. Bombay's protocol demands the serving and drinking of 'cuttings', miniscule cups of tea which taste like very old tea leaves boiled in very stale milk for a very long time, which is pretty much what it is, but I soon evolved the ability to quickly swallow the foul brew without gagging. Whenever possible, though, I'd try to get my fix of my good old black tea, no milk no sugar

On one such outing, I landed up at an Udipi restaurant and, encouraged by the warm and welcoming manner of the waiter (he asked me "kyaa chahiye?" instead of "kyaa mangta hai?", showing himself to be a man of culture and breeding), I asked him if I could be served black tea.

"Of course" he beamed and went into the kitchen to place the order. He returned a moment later with a slightly apologetic look.

"Oh, simple" I told him "make the tea but don't put milk, and don't put sugar"

He smiled benevolently and went back into the kitchen to relay my instructions.

And returned after a moment, looking even more apologetic

"Cook is asking, should he put tea leaves?"

My order was properly executed. The son, when I told him this, laughed and said the guy was trolling me but I don't think he was. Do you?
2 comments